Big Picture: My work focuses on the social aspects of physical planning, urban design, and urban development. The big issue behind this research and practice is how to make more sustainable and healthy cities and the site of most of that research has been in suburbs and smaller cities. I have also developed a number of tools for research and practice and been a reflective practitioner.

Currently, I am most interested in how to develop healthier places in a suburbanizing world. Specific projects focus on how to improve housing for aging particularly for those who are frail, how to make healthy planned communities, and the role of urban density in health. My overall contribution has been to point out the complexity of making healthier places, both comprehensive new towns and incremental interventions, as well as developing new ways of measuring those environments.

In my professional work as a planner and urban designer, and in my research, I have addressed this problem in several ways—studying and participating in plans, developing tools, and reflecting on practices in a range of different projects. My main contributions have been in three areas. 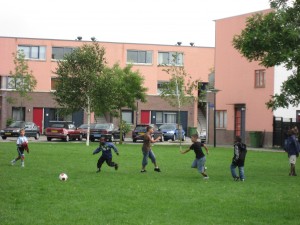 Play in the planned community of Almere, NL

Innovative Planning and Design: My first book on suburbs, Constructing Suburbs (1999, Routledge/Gordon and Breach), looked at competing approaches evident in planning for suburban development in Australia in the 1990s. Its focus was on how issues of sustainability and urban growth were articulated and how tradeoffs were made about social and ecological goals.

My next book, Reforming Suburbia (2005, University of California Press), used multiple methods to reassess three of the largest and most successful of the U.S. new towns (“planned communities”) of the 1960s and 1970s planned as intentional alternatives to problems urban sprawl–social, aesthetic, economic, and environmental. These developments used many of the techniques currently evident in smart growth and new urbanist developments with varying levels of success.

A series of articles on planned communities, co-authored with Katherine Crewe, continued this work, examining aesthetic, environmental, and social issues in a set of 20 such developments in the US, Europe, Japan, and Australia, built from the 1950s through the 2000s. The articles drew lessons about the success of model communities in providing a real alternative to current development practices; the articles also compare different urban planning and urban design philosophies.

Most recently I have worked on examining suburbia more globally, investigating how to define it and how to think about a future where most urban growth will be in suburbs. This engages the variety of suburbs and key topics such as density, livability, well-being, and health.

China’s Urban Communities (2016, Birkhäuser) co-authored with Peter Rowe and Har Ye Kan, explores 25 communities in Beijing, Shanghai, Shenzhen, and Suzhou, developed or redeveloped over the last three decades. They represent  “market housing by ordinary real-estate developers for the emerging middle and upper middle class, by governments as social housing and housing for government workers, and as worker housing.”  Focusing on issues of well-being, community formation, and building type the book finds that these diverse neighborhoods are typically good places to live, with more spacious houses and green space than in the past, and typically good access to local services. However, the strong social ties of the dan wei or work unit system have eroded over time, air and water quality can be poor, many people live in crowded conditions (particularly those without residence permits), commutes can be long, and megaplot enclaves, while having a long history in China, pose continuing problems for accessibility. As such neighborhoods age, they provide opportunities for rebuilding to better connect the parts of the city, diversify the housing units, make green and common spaces more useful, and reconsider lower density traditions in some areas. Many promising examples are already in existence.

Healthy Environments: Other research has looked in more depth at specific aspects of healthy environments.

Designing Small Parks (2005, Wiley, with Laura Musacchio), explored the tensions between designing open spaces for social and ecological goals, focusing on small sites where and contradictions are most difficult to resolve.

More technical projects have examined how the built environment affects physical activity and food access in adults and adolescents (funded by the Robert Wood Johnson Foundation and National Institutes of Health including the Twin Cities Walking Study, TREC-IDEA, ECHO, and EAT-III projects).

In addition, I have done work drawing out the practical implications of research on a range of connections between health and environments from social networks to air quality (for example the Design for Health project and the newer Health and Places Initiative [HAPI]). The big idea behind this work is that there are many connections between health and place and that the recent focus on food and physical activity, while useful, is too narrow. These activities have won national awards from the American Planning Association and the Environmental Design Research Association. Many of these projects have been located in suburban sites or involved work with suburban municipalities. The project links page provides more detail.

Creating Healthy Neighborhoods: Evidence-based Planning and Design Strategies (APA Planners Press/Routledge, 2017), co-authored with Emily Salomon and Laura Smead, bridges the gap research on health and place and neighborhood planning and design: synthesizing and adapting research findings, proposing how to make informed decisions in the absence of research, and embedding this in a health-informed planning process. 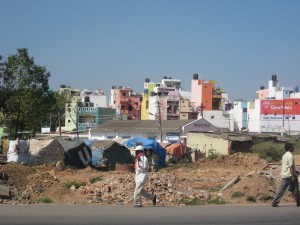 Reflective Practice/Process of Planning and Design

As a reflective practitioner, I have also stepped back, writing articles dealing with some broader questions related to the practice of planning, design, and research. For example, I have authored or co-authored articles defining the range of practice approaches used in landscape architecture, community design center structures, reflecting on women and the architectural star system, outlining different cultures of planning research, critiquing evidence-based practice, and articulating a typology of environmental design research approaches. These draw on a number of long-running projects that mixed research, practice, and education while also working at the intersection of design and planning.

To undertake this research and practice I have collaborated in creating a number of new tools and methods—an urban design inventory (the Irvine Minnesota Inventory), GIS protocols for measuring food and physical activity environments, planning-oriented health impact assessments (the Design for Health and Health and Places Initiative suites), a survey of walking and cycling, and award-winning participatory planning techniques (Minnesota Block Exercise/Corridor Housing Initiative, YouthPower Guide). I have also tested several tools for reliability and validity.